Ukraine is in extremely difficult conditions of unmotivated Russian military aggression aimed at the destruction of our state. A large number of civilians suffered physical and psychological injuries, many soldiers gave their lives for the freedom of Ukraine, a considerable number of defenders were injured. About 30% of Ukrainian enterprises have completely stopped their economic activity, and only 45% are partially working.

Post-war recovery is very necessary for both people and business. Each subject has his own trauma and needs an individual approach to solving his problem. It is important to use digital technologies as an accelerating factor in the renewal of a person’s mental and physical condition and a new breath in the business processes of enterprises.

Immersive technologies, which include augmented and virtual reality, are becoming a quick and high-quality “pill” for both the affected person and the affected business.

The aggressor plunged Ukraine into war in one night, thereby creating a great tragedy for everyone and everyone personally. Ukraine’s task today is to win and recover as soon as possible. Part of the latter will be helped by another Immersion – immersive.

Immersive technologies are technologies of visual, auditory and partially tactile immersion of an individual in the created 3D world. In fact, it is an alternative space that is created with the help of 3D graphics and that a person sees in special virtual reality glasses or activates with his smartphone in augmented reality. A person can interact with the 3D elements of this alternative space. This contributes to the psychological recovery, physiological rehabilitation of individuals, and brings new customers to the business and, as a result, an increase in profits.

Let’s look at examples of the use of augmented and virtual reality technologies in post-war reconstruction separately for individuals and separately for businesses.

Psychological and physiological post-war rehabilitation is very important for people. This applies to both military personnel and civilians. Currently, we see many people facing the problem of loss of limbs and damage to the musculoskeletal system due to enemy fire. Also, people have quite deep problems with their psyche. Qualified rehabilitators and psychologists of our country are already working on these problems. Immersive technologies of augmented and virtual reality can significantly enhance the effect and accelerate recovery for a person, as evidenced by many international clinical and innovative studies.

Virtual reality induces physiological and psychological responses in the patient that can be measured in terms of changes in stress hormones and other biological states. Visually, objects in the virtual world seem real. That is why they elicit brain and behavioral responses to the virtual simulation that mirror those in the real world.

With the help of virtual reality, the rehabilitation process can be greatly improved and accelerated. A VR simulator is being created, with the help of which the patient visually immerses himself in a certain created 3D world, while physically trying to balance and develop damaged limbs. 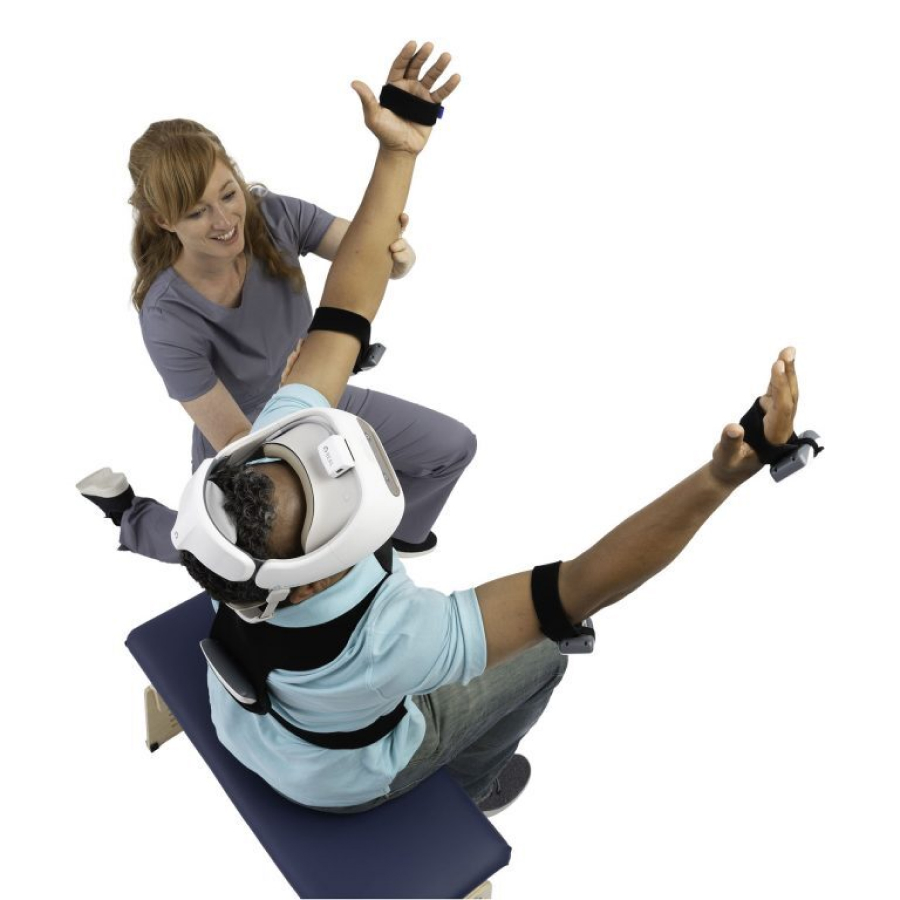 For example: the patient physically stands on a special balancing platform (forward-backward or right-left balance); In virtual reality glasses, he sees that he is on the bow of a tall and narrow deck (or a boat) and is balancing. All around is the sea (water) with waves. Losing the balance of the body in the physical world – in VR, a person falls into the water (in real life, he does not fall, there is insurance)

Unfortunately, the problem of losing an arm or a leg is one of the most common today. Faced with this, people experience phantom pains. Patients suffering from paraplegia of the lower extremities cannot regain feeling in their legs or arms, but often experience phantom pain. The feeling of pain is real and, as noted, it cannot be removed with the help of drugs, but possible with the help of immersive technologies of augmented or virtual reality. According to a study by EPFL (an advanced Swiss innovation institute for science and technology), VR significantly reduces phantom pain. 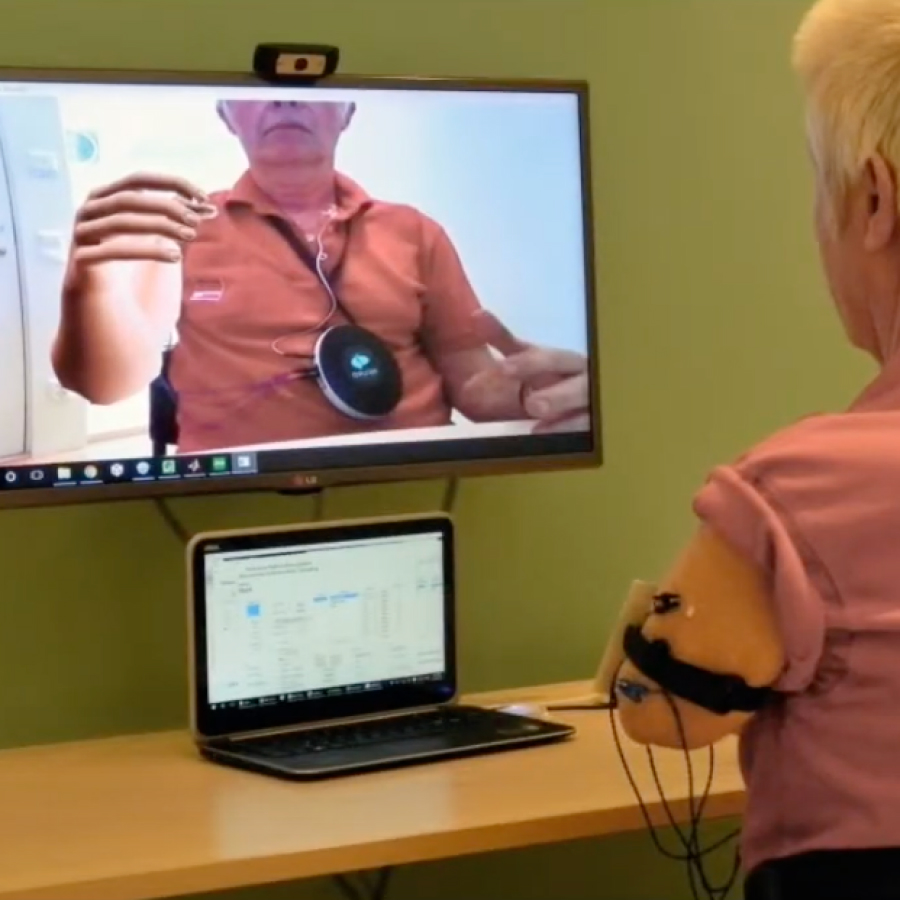 For example: A patient with paraplegia puts on a virtual reality headset, in which he sees “his” lost leg. (Artificial 3D legs or arms are used, which are “attached” to a person in real time in VR). Next, the therapist taps the patient on the back and, in parallel, on the artificial leg — patients see these taps in virtual reality.

Thus, a person receives two stimuli: one – tactile, on the back, the other visual, in VR. In the process of rehabilitation measures, the patient begins to feel as if the tapping on the legs are real. This is possible because in this case the visual stimulus is stronger than the tactile one.

Psychological rehabilitation with the help of VR simulators works in such a way that the patient visually immerses himself in a certain created 3D world, being in which he can interact with 3D objects, listen to the right sound, visually feel the atmosphere of the space, calm down and thereby ease his morale. The content in the VR headsets “send” the patient to very specific elements of their traumatic memories, including images, smells and sounds. This maximum deep immersion can be both gamified (presented as a game) and realistic. The psychologist selects from the catalog of content one that falls under the parameters of the disorder of a particular patient and allows him to process memories, put the trauma in place and regain control over his daily life through full visual immersion in a 3D world in VR.

Thus, according to empirical research, 16 out of 20 Iraq War veterans who underwent exposure therapy in virtual reality no longer met the diagnostic criteria for PTSD after the completion of treatment. 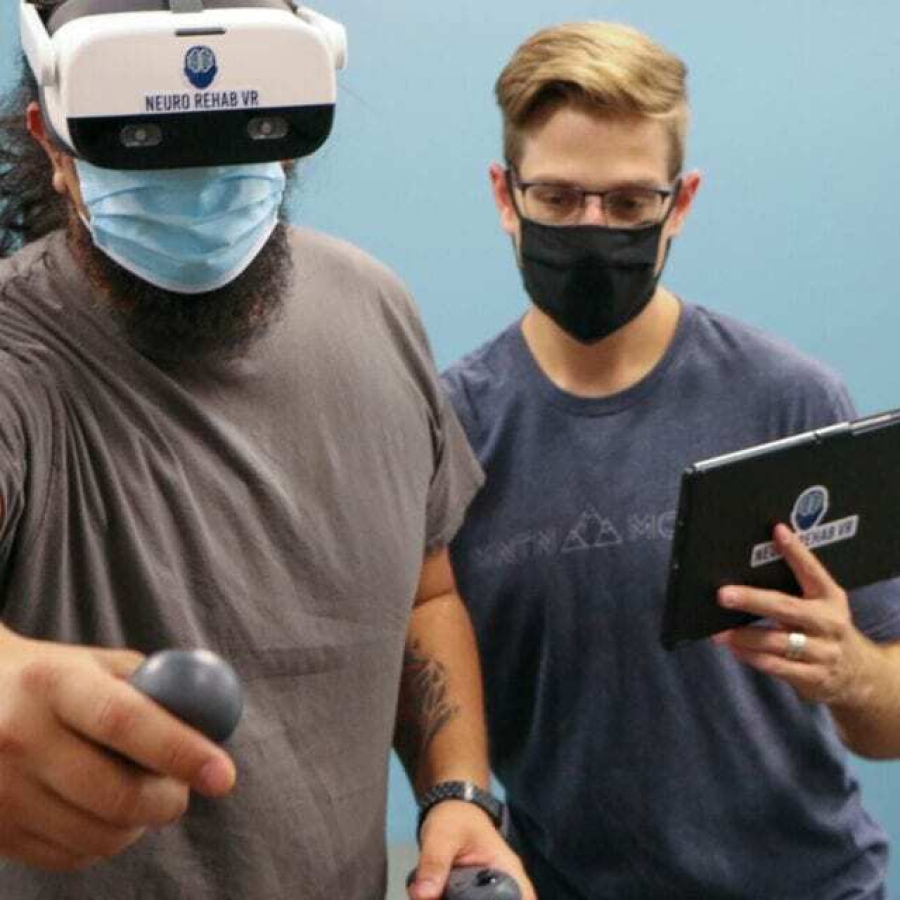 The “image” of immersive technologies of augmented and virtual reality is “toy”, because a lot of users use AR | VR is for gaming purposes. As we can see, this is not always the case.Virtual and augmented reality is a serious technological tool in medicine and psychology, which is currently very relevant in the context of the post-war recovery of Ukrainians. Active implementation of immersion technologies in medical processes began even before the war in Ukraine. Yes, our company has created a VR simulator for women in labor, which is used during childbirth as “visual VR pain relief”. To date, we are actively working on the creation of immersive VR simulators, which are described in this article, in order to ensure the rehabilitation of civilians and military personnel who suffered injuries from Russian aggression.